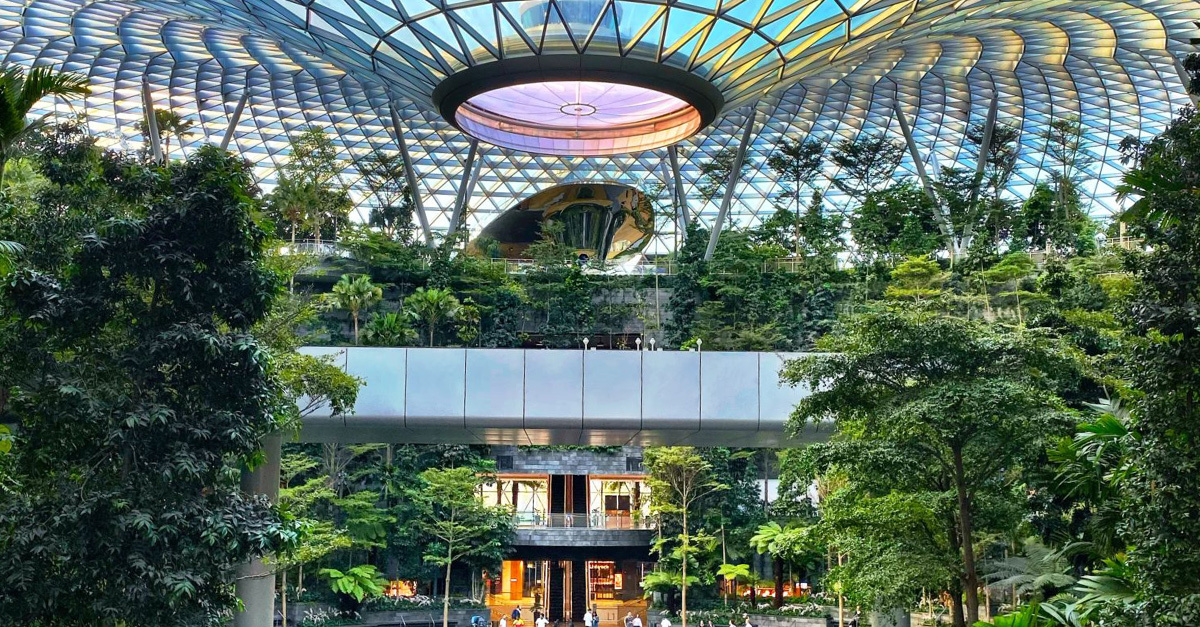 Those who travel frequently consider airports an indistinguishable means to an end. But not Singapore’s Changi Airport. This artistic and functional architectural marvel is a modern example of the exhilarating experience that flying was at one time, and still is in some parts of the world. It is also a destination of its own. Changi Airport is so impressive that it deserves its own full story.

We arrived in Singapore at 5 in the morning after flying for 16 hours (20 if you include our flight from Houston), and we were too sleep deprived to take in the much acclaimed airport—except to notice that we made it from wheels down through immigration and to our cab in less than 20 minutes. Forty eight hours later we were back at the airport for the next leg of our journey to the Maldives Islands. We arrived three hours early for our flight so that we could both explore the airport and experience Singapore Air’s business class lounge.

Our first clue that Changi is not your typical airport came from a Singapore business acquaintance. He mentioned that he takes his family to the airport to enjoy the many restaurants, shopping and entertainment choices for his children. We could not imagine an airport as such a place.

Sure, Houston’s George Bush International Airport is a modern and functional airport with many amenities, but it is the last place I would go if I didn’t have to.

Changi Airport, the world’s 19th busiest, (Atlanta’s Hartsfield is first) has been recognized as one of the world’s best airports since it opened in 1981. Skytrax, the UK international air transport rating agency recently named Changi as the world’s best for the seventh consecutive year. (No United States airport has made the Top 30.)

Changi, as its website suggests, is “more than an airport.” It is huge, extending five floors above ground and five floors below ground. I would characterize it as a top-flight mall (pun intended), with about the same number of stores as Houston’s Galleria, a Garden of Eden and museum, and yes, an airport.

This exotic and futuristic airport has obviously put a great deal of thought into attracting the lucrative stop over traveler, and also positioning itself as a destination for non-travelers. There are three terminals, all conveniently sky-train connected, leading to the recently opened “Jewel,” which is not a terminal but a steel and glass domed shopping mall, with its centerpiece being gardens surrounding the Moshe Safdie designed 40-meter-tall Rain Vortex, reputed to be the world’s tallest indoor waterfall.

Transiting passengers who do not wish to exit security and re-enter can still visit Jewel by boarding the sky train in their departure terminal, which will transport them through the Jewel dome and around the waterfall and gardens, and back to their terminal, in less than 15 minutes. The gardens and waterfall are a wonder to behold and not to be missed, as they include 60,000 trees, plants and flowers cultivated from throughout the world. Those who have the time to visit Jewel on foot can wander on paths—albeit concrete paths—surrounding the waterfall that simulate hikes through nature’s rain forests.

Each night there are multi-media shows with the star being the sound and light show around the waterfall.

For kids, there are theme park activities that include multiple playgrounds, a four-story slide, a butterfly garden with 1000 butterflies, two family-type movie theaters showing films 24 hours a day, and an entire entertainment deck with free Xbox 360, LAN games, PlayStation 3 and an MTV booth.

From a traveler’s standpoint, the first thing I noticed was that the entire airport was carpeted for sound softening, and the background music had the effect of both creating buzz and also a Zen vibe. I didn’t find any of the long lines that we recently experienced at Frankfurt airport, where it took more than 30 minutes waiting in line to get through immigration with only two officials handling the entire wing of the airport.

Not so at Changi, where the immigration process is automated. You slip your passport in a reader and it asks for fingerprints. If there is not an issue you are through to security which runs quickly and efficiently.

Although we arrived at the airport three hours early, we had to cut short our tour in favor of visiting the Singapore business class lounge.

Singapore Airlines has been named the best airline in the world several times. As a loyal Global Service United customer, I was eager to try it out the competition on our four-hour flight to the Maldives. Singapore Air’s business class lounge was fairly ordinary in its appearance. A disappointment considering Singapore Air’s reputation.

Unlike most United lounges there was no natural light and the feel was a bit dreary in comparison to the airy modern airport in which it was housed. Aside from the blandness of the club, there was ample seating, a friendly staff and extensive hot and cold food options, including native Singaporean dishes, as well as a plentiful buffet of eggs and breakfast meats that would put US airlines to shame (excluding United’s much lauded Polaris class lounges). I especially loved the frozen yogurt machine.

Although the airline club was unremarkable, our flight to the Maldives was not. Even though our four-hour flight was on a smaller Boeing 737, the business class seats were equipped with extending footrests, soft blankets and a plush pillow. Even more impressive, the flight attendant knew our names and greeted us as we boarded the plane.

Their attention was unflagging during the entire flight. Each business class passenger will find an iPad in the seat pocket. The iPad is loaded with movies (United has similar set up but does not provide the iPads). Even more innovative, when you enter your Singapore frequent flier number in the iPad, you can access various playlists you had created on prior flights.

The food—well, what can one say about airplane food? I’m of the view that restaurants can’t fly and airplanes can’t cook. I rarely eat on planes and Singapore gave me little reason to change my mind.

It is mostly commercial and industrial, and for vacationers it serves as the jumping off place for the nearly 200 four- and five-star hotels—each on its own atoll and reached by boat or seaplane—scattered among the 700 islands that make up the Maldives. Immigration took only a few minutes, and we were met by our hotel’s representative and whisked a short distance to Male’s seaplane terminal for our flight to Kudadoo.

Unlike the buttoned-up style of Singapore Air, there was no flight attendant aboard our 20-passenger seaplane, and our pilots were barefoot. The world’s best hotel experience was waiting.

This article was originally published on PaperCityMag.com on November 29, 2019.