Dogs, Day-jamas and Dropped Calls – How Executives Are Adapting to Working (and Leading) from Home 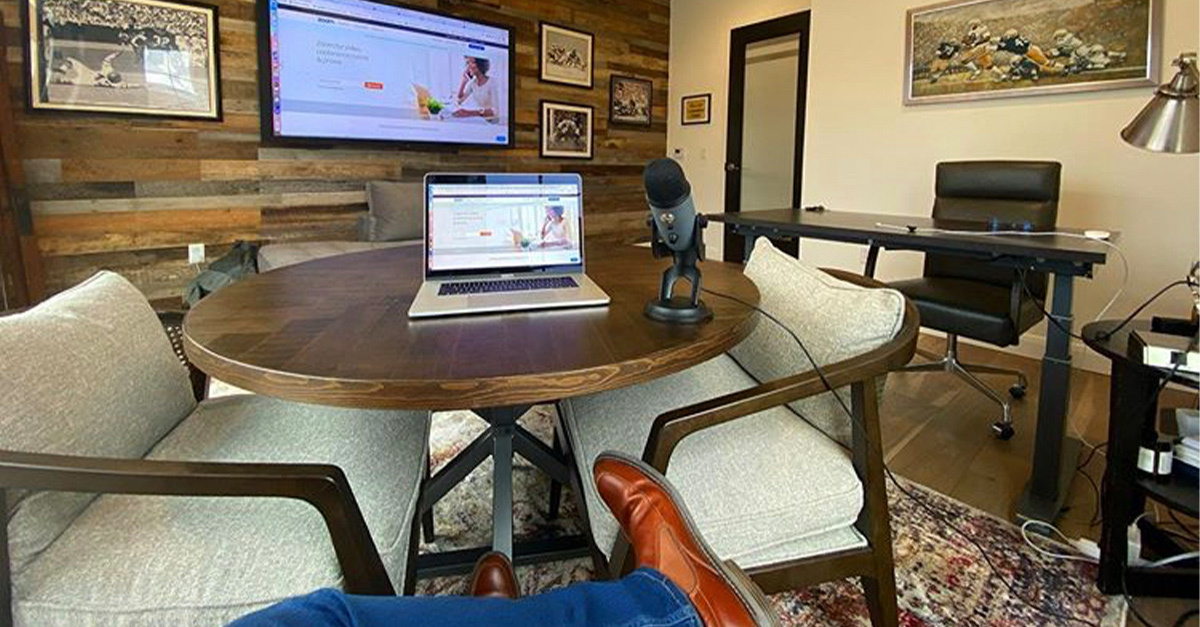 The work from home debate has long been hotly contested. Who could have foreseen that a global pandemic would put the concept so thoroughly and decisively to the test—or rather “stress test,” as spouses, partners, children and pets compete for limited space, solitude and (pets excluded) bandwidth? All while laboring under the heavy burden of health and economic fears.

Although some industries and job functions may lend themselves more naturally to working from home, we asked some of our clients—executives in the investment banking, not-for-profit and professional services industries—how they are adjusting.

One Chicago-based executive appreciates the fact that he can start working immediately, “without an hour-long train ride both ways.” He shares his space with his wife, who also works full time, and their college-age triplets, and still, he jokes, “no one wants to walk the dog.”

Here is what others had to say:

“The day still has to start early; that remains unchanged,” says Moody matter-of-factly. “And judging by the volume of emails in my inbox this morning, a lot of people feel the same.”

The biggest challenge, Moody concedes, is conference calls. “I have three kids under the age of 11, three dogs, my wife and mother-in-law all under the same roof. The idea that any room in the house is safe from interruption is a joke. I’m taking conference calls in the car, either sitting in the driveway or driving around the block.”

“I also miss the natural connectivity you have in an office environment,” Moody says. “The collaboration goes to zero. Normally, we’d be able to dive into issues throughout the day. You might have something that doesn’t hit your personal to-do list until after lunch. But after lunch, you’re not going to be able to walk by your COO’s office to take a deeper dive. Instead, you need to schedule a call or get on his calendar, which is challenging.”

Will there be benefits that come from this? “I don’t think so,” Moody replies. “I really don’t. You can say that you’re closer to the family but the reality is, depending on your job, you have a demanding set of responsibilities that make it difficult to be engaged at home. Combining the two in the same space doesn’t make a better connection for your family. My seven-year-old doesn’t understand that daddy is on a conference call; I’m not readily available to help her like I would be on a Saturday. And I have a client on the other end who has real needs.”

“We need to get our country back to work—for our economy, for our sanity, and for our productivity.”

“We’re at week four now,” says Jones of the work-from-home order for her California-based team. “Our routine is virtually identical to what it was before—same hours, same expectations, same level of productivity, with a few notable exceptions. We understand that people have additional stresses when they work at home, particularly those who have young or school-aged children or who take care of elderly parents.”

“We've been very careful to let our employees know that—not only is it okay if your kid makes a cameo appearance on a videoconference or if the dog barks—but even broader than that, we understand that working parents are now engaged in online schooling. We've been very intentional about communicating repeatedly to our employees that we’re supportive; we're flexible,” Jones iterates.

Jones says that this flexibility has led to more productivity. “Our team feels like they have permission to do the things that they need to do, on their schedule—whether that’s working before the kids wake up or after they’re in bed, or both. Every human around the globe is dealing with extraordinary stress right now. It's important for employers to be supportive. We all are in this together.”

On a smaller scale, Jones says it’s also important that employees have the right equipment. “We've made sure that our people have the software, hardware and other equipment they need to be productive when they're working from a distance.”

Jones shares her home (and home office) with her husband of 32 years and a “very social cat, who likes to talk.” Her biggest challenge, she says, is staying connected and being available for longer hours. “From a leadership standpoint, if you're going to support your employees and accommodate different schedules, you have to be available almost 24/7 and check in more often. It’s important that people continue to feel valued and appreciated and to know that they're not alone.”

On the upside, Jones enjoys the lack of interruptions common in an office environment. “My home is quiet. I have the ability to hunker down and focus solely on work without people popping into my office or thinking about what’s for lunch.”

And, she jokes, “my commute is a lot shorter.”

Randy Garn is always on the move, or was, actually, until two weeks ago. As a partner with High Performance Institute, he typically divides his time between offices in New York, Dallas and L.A., meeting and mentoring clients. Since the outbreak, however, Garn has adapted, moving all of his face-to-face meetings to Zoom calls or Google Hangout.

Garn shares his home with his wife and their six children ranging in age from seven to 19 years, including two sets of twins. “The best part about this is that, during this period, I don’t have to leave my kids and beautiful wife and lose that precious time with them.”

Another benefit of this period of quarantine, Garn believes, is the acceleration of what he calls the “digital transformation”.

“Learning to communicate, market and sell online is no longer a choice. Everyone will need to learn how to use digital tools to be strong leaders, manage people, create powerful content and increase sales.”

“Innovations will be made and new companies founded during this season,” he says, pointing to other enterprises founded amidst economic challenges, such as AirBnB, Uber, Slack, Square and Venmo. “There is no better time than now to build out your own online software or technology that you always knew, in the back of your mind, that you needed or wanted to build,”

Garn has also adopted new habits during this period of isolation: “When all of this started, I picked up journaling at night to make sure I’ve got everything planned for the next day. A lot of people have a hard time sleeping right now; there is a lot of fear and worry. But I've found that if I get the acid out of my stomach at night—by planning my whole day the night before—I can look at each day effectively and make sure I'm focusing on the most important things.”

“Journaling is a simple concept that has made a profound difference for me.”

“I’ve been working at home eight or nine days now,” Whitman shared. “The learning curve on every level has been incredible.”

Whitman, who joined our client Thompson & Knight last year, is sharing his work space with his wife, three kids and two dogs. “I have a full house,” he admits. “At any moment, my kids could bust through the door interrupting a conference call, or the dogs could bark, or someone may turn off the power to the house because they were playing with the wrong switch—all of the crazy stuff that can happen in a house when you’re home 24 hours a day.

“I joked with my team today about what the appropriate ‘day-jamas’ are for a team meeting. We decided a t-shirt and jeans were appropriate. There used to be a clear divide between work and home. Now, it’s all on display. It has humanized us all.”

For Whitman, the biggest adjustment has been flexibility. “I’m used to working around different time zones. Now, I’m working around different work schedules as well. The nuts and bolts of what used to be covered during the business day may now need to happen at 7 a.m. or 8 p.m. for those working parents who are juggling home-schooling activities along with a full workload. You have to be flexible, and demonstrate empathy and emotional intelligence at a time like this.”

There are moments that can be bonding, Whitman emphasizes. Last week, instead of a traditional all-office luncheon, Whitman called Domino’s Pizza and asked if he could place a single order to deliver pizzas to the entire firm (they could not), but they did come up with a creative solution: the firm bought 500 individual coupon codes for free pizza and emailed those to employees. Whitman asked team members to set up a video call with a colleague over their pizza lunch and send in pictures. “It was a positive moment for the firm, even in a time of crisis. There are opportunities to create those great moments that define your culture; you just have to think differently about how to do things.”

“I think firms that are able to embrace the challenges of this crisis are going to come out stronger on the other side.”

“This has been a significant change for me,” says Lamar, who is typically on the road four days a week. “The good news is that working from home hasn't affected our ability to conduct a search. We're still able to get the research done, conduct our market outreach and interview potential candidates. I prefer to conduct interviews and meetings in person—nothing builds long-term relationships better than in-person meetings—but we’ve adapted.”

Lamar shares his space with his partner Faith, their dog Lucy, and two of their three children. “My son is home from college and Faith’s daughter moved in with us just before the stay-at-home order took effect in California.”

When asked about his biggest challenge, Lamar jokes, “It's certainly not eating. Faith has prepared home-cooked meals every single night. I'm exercising more than I ever have to keep the weight off.”

“The big challenge we have is that several searches are coming to an end, and our clients’ offices are closed. We just completed a search for the COO of an Am Law 50 firm, and he’s starting and working remotely from his home. On the upside, now more than ever, it’s a good time to reach potential candidates. People are very responsive.”

Another upside has been the opportunity to connect with long-time clients. “I spend part of my morning every day reaching out to clients, old and new, just to touch base. I've gotten a response within two to three minutes from every single one of them, which is remarkable. Everyone understands the challenges we're all facing. We’re all in this together, and we're going to get through it.”

After a week of adjustment, things are settling down for the firm and its clients. “We brought in several new searches this week, which is ideal. There’s a lot of legwork that can be done during this period.

“Eventually, this is going to come to an end and, when it does,” Lamar emphasizes, “our clients and their new talent will be in a position to hit the ground running.”