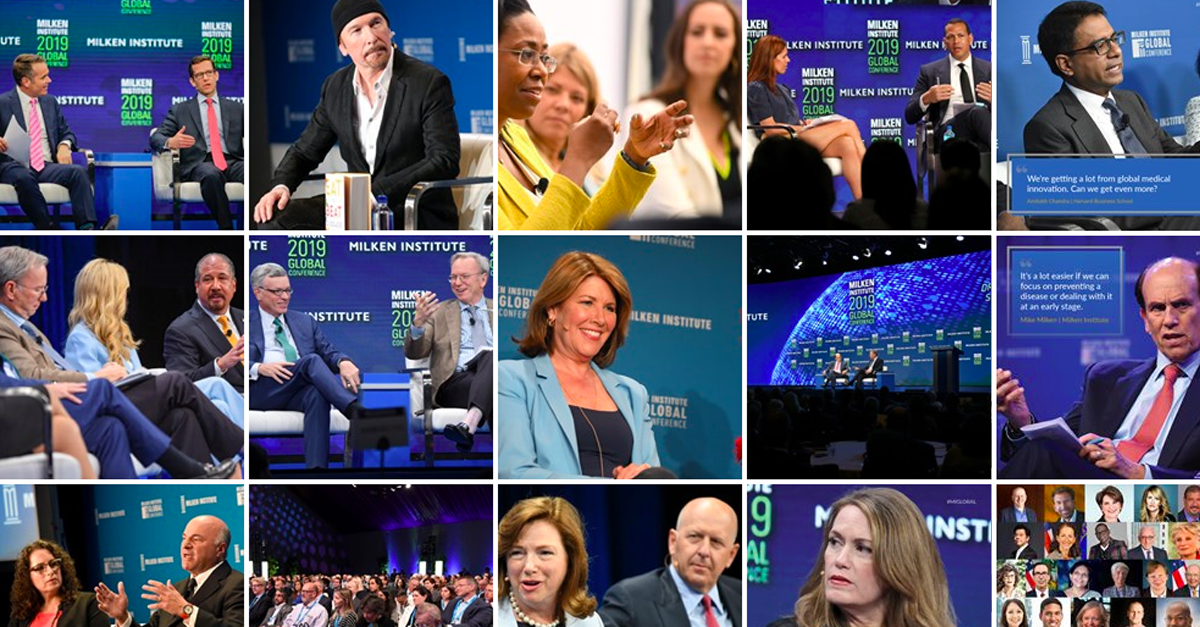 Earlier this month, I attended the exclusive, invitation-only 22nd annual Milken Global Conference at the Beverly Hilton hotel—home of the Golden Globes. This year’s theme was “Driving Shared Prosperity.”

For three days, 4,000 attendees from 70 countries heard more than 800 entertainment, Wall Street, philanthropic, economic, scientific and global political leaders address topics including finance, government, medical research, nutrition, equality, the environment, philanthropy, technology, media, education, longevity and human capital. With as many as 15 sessions taking place concurrently, you can choose your own experience. The scene is buzzy, exclusive and, at the same time, friendly and sociable.

In between sessions, attendees bask in the warm L.A. sunshine in a vast outdoor lounge decorated with plush sofas, cushions monogramed with the Milken Institute logo, and a jumbo TV screen live-streaming some of the panels, while enjoying plentiful refreshments and unlimited celebrity sightings. This year—in a nod perhaps to its younger attendees and an increasing emphasis on longevity and health—participants could attend early morning yoga classes, receive a chair massage, reiki treatment or play with the puppies that were brought out each afternoon for a feel-good moment.

Security is tight, with a badge and scannable facial ID required for admittance. CNBC, LinkedIn, Fox News and Bloomberg all broadcast their morning programs from the hotel lobby.

Participants move quickly from one session to the next. Fortune 500 CEOs, heads of state and celebrities all mingle without entourages. And although the conference states the dress code as business casual, most men wore suits and women wore their best boardroom attire.

Each Milken Global Conference is different with new speakers bringing different solutions to the many challenges facing our world today. The Milken Institute seems to attract leaders who rarely speak elsewhere and pairs them with other leaders to create a delightful synergy of information, entertainment and inspiration (The Edge from U2, for example, spoke on a panel with scientists, discussing his experience with food as medicine.

Here are some of the sessions that caught my interest.

At the 2018 Global Conference, there was unbridled optimism and exuberance as markets hit new highs, corporate profits increased and unemployment reached record lows. In 2019, not a lot has changed: Corporate profits are decent, unemployment rates are low and the stock market has recovered nicely from the 2018 Q4 downturn. Yet there was a voice of caution from many of the world’s leading investors at this year’s conference—not alarm, but caution. The reasons given were not consistent: increased corporate borrowing, declining productivity, a weak dollar and trade issues. Whether these gurus know something we don’t or are just observing a business cycle that has lasted longer than anyone would have thought is not clear. Keep an eye on these themes.

The Political Crystal Ball: Sometimes the Right and Left Agree

Some of the most popular panels take place during the lunch hours in the main ballroom and overflow spaces, and this year was no exception. Those interested in politics and the 2020 election were treated to a highly entertaining panel with Jim Messina, Obama’s 2012 campaign manager; Karl Rove, former election guru to President George Bush; and Mark Penn, pollster for Hillary Clinton’s 2008 presidential campaign.

While from different political camps, one thing on which these panelists all agreed was this: There is a global economic anxiety that which will become apparent—as Messina quipped to much laughter—with the “700 Democrats running for the 2020 nomination.” Karl Rove further pointed to the lack of trust in our government.

Mark Penn noted that we are a 40-40-20 voting population: Forty percent of voters think Hillary should be jailed; 40 percent think Trump should be impeached; and 20 percent are swing votes (half of whom are in swing states). Messina and Rowe believe the swing voter only comprises 10% of the electorate. Furthermore, the country has never been older (far more Americans are over 60 than under 30). Older voters are driving election results and changing blue states to red and red to blue, but younger voters are much more involved in politics than their parents.

Rove, who was unfiltered and funny, commented that every election is about turnout and bold moves. Messina echoed this and added that Donald Trump won the 2016 election because he converted swing voters. His problem today is not his performance but his personality, said Messina, adding that “the gap between his likability and his performance is huge and will provide an opening for the Democrats in the 2020 election.” Rove commented on what he characterized the upcoming election season as a “roller derby mess.” Messina chimed in and said “don’t believe any poll you see; it is all bullshit.” Penn said Democrats have habit of nominating the unexpected but he believes Biden may prevail because he represents the mainstream.

All panelists agreed that Biden made an impressive entry into the race though Rove was quick to quip that “Joe is a little goofy… a little too hands-on” which elicited laughter from the audience. Messina said it is important for Democrats to focus on the issues rather than the “mad man with orange hair running for reelection.”

The entire discussion was entertaining, civilized, informative and with a lot of quips, one-liners and repartee thrown in.

Diversity Improvement: Not Much to Crow About

The Milken Institute has been leading the discussion about gender inequality and the economic impact of the lack of diversity for years. Each year, I expect good news from the panels on diversity. While corporate America seems to be trying to address the problem, with programs such as blind resumes, mentorships and quotas, the evidence does not reflect as much change as one would hope for.

Richard Ditizio, President of the Milken Institute and one of the nation’s most eloquent advocates of pay equality and diversity, opened the discussion with an observation that the US Senate did not have a women’s restroom until 1992. The House of Representatives, which now has more than 100 elected women, only added one eight years ago. Ditizio asserted that this indicates “who corporate America and governments expect to come to work.”

In a panel entitled “Walking the Talk: Are D&I Policies Affecting Corporate Culture?”, head of research for ADP Research Institute, Adu Yildirmaz, disclosed that after analyzing pay for 13 million workers, ADP concluded that women earn 79% of what men do—an increase of only a few points in the last two decades. Companies striving for pay equality are now looking not just at base salaries but bonuses as well, as many studies show the income gap between women and men increases even more when comparing total compensation.

Despite the slow progress, corporate America—at least as represented at the Milken Institute—seems to be getting it. Speakers at the Conference were nearly 40% female, and Citi sponsored a special lounge with diversity programming.

One of the most thought provoking panels, led by Gayle King, co-host of “CBS This Morning”, featured women over age 60 who had broken career, age and gender barriers to achieve powerful and influential careers. These women gathered to discuss what aging looks like, especially for women.

While all of the women commented that they felt at the peak of their games and that society needed to rethink aging sterotypes, most of them admitted that they could not let their hair go grey because of the stigma attached to it. As King said after the session, “I’m under no illusion that if I was gray-haired or 50 pounds overweight with wrinkles on my face, the reality is I would not have a job on television.”

Although people left to the sounds of Katy Perry’s “Roar”, I felt both inspired by the women but conflicted that there was a panel for women working post-65 and not men. We still have a long way to go.

Those interested in business, sports and entertainment stars are never disappointed at the Milken Global Conference. This year’s crop included legendary Calvin Klein who made a rare public appearance, U2’s lead guitarist The Edge appearing on a panel discussing the medicinal power of foods, Ivanka Trump discussing her job creation program (with a bipartisan panel including Eric Schmitt from Alphabet and EY CEO-elect Carmine Di Sibio) and late night TV host James Corden.

For those wanting to see rock star CEOs, Goldman Sachs CEO David Solomon talked about how important it is for him as a CEO to show his personal side as a way to communicate with his increasingly younger employees (yes, he uses Instagram, where he describes himself as a dad and a D.J. with a day job at Goldman Sachs).