We could all use a little advice…

Less Pomp, Dire Circumstances for 2020 Graduates — A Round-up of this Year’s Best (and Worst) Commencement Speeches 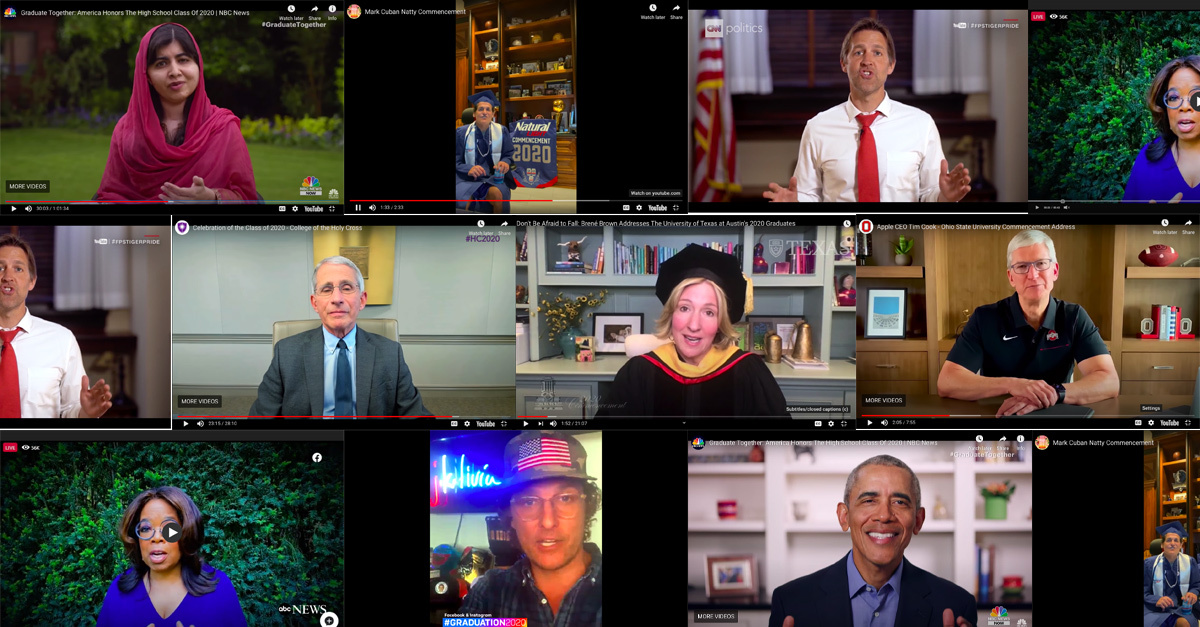 What can we say to the graduates of 2020? Pulled from their final weeks of on-campus learning, today’s graduates traded classroom camaraderie for virtual videoconferences and six feet of social distancing. They enter an economy upended by a global pandemic, compounded by scenes of civil unrest and distracted by Twitter turf battles. It’s a time unlike any other.

What words of wisdom, then, can we offer? As members of the generations that came before them, what advice can we give, when we ourselves do not have the answers?

With public gatherings prohibited, most of this year’s commencement addresses were presented virtually (although a few schools got creative with drive-thru or drive-in events). Celebrities, athletes, politicians, business leaders, influencers and even reality stars took to the internet from their living rooms and backyards to share what advice they could—some with words of greater wisdom than others.

In keeping with TAG tradition, we review some of the best and worst of these anything-but-traditional 2020 graduation speeches.

It’s up to you

Perhaps the most widely viewed speech of this commencement season was former President Barack Obama’s address. Participating in a nationally televised event, #GraduateTogether, Obama subtly criticized the handling of the coronavirus pandemic and stirred up controversy when he said, "All of those adults who you used to think were in charge and knew what they were doing? Turns out, they don’t have all the answers. A lot of them aren’t even asking the right questions. So, if the world is going to get better, it’s going to be up to you.”

The former President balanced his remarks with some of his trademark optimism, urging graduates to use their energies to foster justice and “remake the world.” He offered three pieces of advice: Don’t be afraid—learn from past mistakes; Do what you think is right—ground yourself in values like honesty, hard work and responsibility; and Build a community—leave behind old ways of thinking that divide us.

“You’re going to have to grow up faster than some generations,” he added. “This is your generation’s world to shape.”

Nebraska Senator Ben Sasse’s online address to his alma mater, Fremont High School, was more remarkable for its cringe factor than for its intended message. While good-natured laughter and amusing anecdotes are perhaps apropos this year, Sasse’s attempted humor missed the mark. CNN called it “the weirdest commencement speech you will ever hear.” In a rambling eight-minute talk, the Senator curiously ridiculed graduates’ physical fitness and “everyone named Jeremy,” and somehow managed to incorporate murder hornets, Joe Exotic, a grammar lesson and psychologist-bashing. One promising bit—“we will bring the economy back; we are going to beat the virus”—quickly lost its promise when he followed with: “We're going to have to have a serious reckoning with the thugs in China who let this mess spiral out of control by lying about it."

His remarks fell flat; many students, parents, school board members and other community members took to social media and letter-writing in protest.

When glittering plans are scrambled...

As many have done before him, Apple CEO Tim Cook drew from the lessons of the past to inspire Ohio State University’s class of 2020 to embrace their futures. Citing Franklin Delano Roosevelt, T.S. Eliot and Amelia Earhart—three people who came of age in the midst of the 1918 Spanish flu pandemic—Cook reminded students that hard times forge greatness. “Those who meet times of historical challenge with their eyes and hearts open—forever restless and forever striving,” he said from his Palo Alto home office, “are also those who leave the greatest impact on the lives of others.”

Cook spoke of overcoming his own personal and professional disappointments, noting that when he was hired by Apple in 1998, he planned to spend the rest of his professional life working for Steve Jobs. The sorrow and loneliness he felt when Steve Jobs died in 2011 was immense. “When our glittering plans are scrambled, as they often will be, and our dearest hopes are dashed, as will sometimes happen, we’re left with a choice: We can curse the loss of something that was never going to be … Or we can see reasons to be grateful for the yank on the scruff of the neck, in having our eyes lifted up from the story we were writing for ourselves and turned instead to a remade world.”

Cook encouraged graduates to "memorialize in your heart the way in which these times reveal what really matters: the health and well-being of our loved ones, the resilience of our communities, and the sacrifices made by those—from doctors to garbage collectors—who give their whole selves to serving others." He closed by calling on matriculating Buckeyes to “wear these uncommon circumstances as a badge of honor” and to build “a better future than the one you thought was certain.”

Best-selling author and professor Brené Brown also encouraged graduates to embrace disrupted plans: “Your ability to live a life that’s full of love and meaning, to make the world a braver and kinder place, to disrupt and reshape the future, has very little to do with the greatness of your plan,” she said in a virtual address to graduates of her alma mater, The University of Texas. “It depends completely on your ability to get back up and begin again when your plan fails.”

What’s the key to getting back up and beginning again? Vulnerability, was Brown’s trademark answer. “We’re raised to believe that vulnerability is weakness, but that’s the greatest myth of all. It is not. It is actually the most accurate way to measure courage.” Suggesting that 2020 graduates are uniquely suited to change the world, Brown encouraged graduates to embrace the disruption of this year and “get back up.”

“My falls have taught me a hundred times more about who I am than any of my achievements ever have, ever could, or ever will … While every fall is different and every learning is new, I’m not afraid to fall anymore because I’ve built the skills to get back up.”

Precision of thought, economy of expression

Just a few months ago, Dr. Anthony Fauci, one of the world's leading infectious disease experts and member of the federal government’s coronavirus task force, would have been an unlikely celebrity guest at college commencement ceremonies. But Fauci's prominent role in the pandemic response has catapulted him into one of the most recognizable doctors in the country; he has been portrayed on Saturday Night Live by Brad Pitt, and is the subject of tribute songs, posters and even his own fan club. He used his newfound celebrity for several surprise graduation messages, addressing his alma mater, College of the Holy Cross, as well as Johns Hopkins University and other prestigious institutions.

He spoke warmly about his Jesuit education and certain tenets of the Jesuit tradition that have sustained him throughout his life and career. “Two of these, precision of thought and economy of expression,” he shared, “inform how I think, how I write and how I communicate with the public every day—especially during the present, unsettling times.”

Despite his position at the epicenter of the U.S. coronavirus battle, Fauci delivered a message of hope. He suggested that the global pandemic presents not only dangers but also opportunities for graduates to mobilize their education and unite in overcoming the challenges we all face today. "Now is the time, if ever there was one, for us to care selflessly about one another."

From the lofty, to the practical

The best commencement addresses of 2020 were specific to these truly difficult times and yet universally hopeful and inspiring. Though they were intended for 2020 graduates, there is meaning for everyone in the words offered by this year’s graduation speakers.